Solar generators are devices that are designed to provide users with a source of backup power for various requirements. They can be used both outdoors and indoors depending on the needs of the individual.

Compared to other power generators, a solar-powered unit is portable and lightweight. This means that people can use it to charge a variety of devices through the energy provided by the sun.

Furthermore, solar generators are seen by many as an eco-friendly alternative to conventional generators that require you to use non-renewable resources.

It appears that these sun-powered units have all the benefits going for them. But how do they work exactly? And what are their limitations?

Let’s take a closer look by answering some of the most common questions today concerning solar generators.

How Do Solar Generators Work? 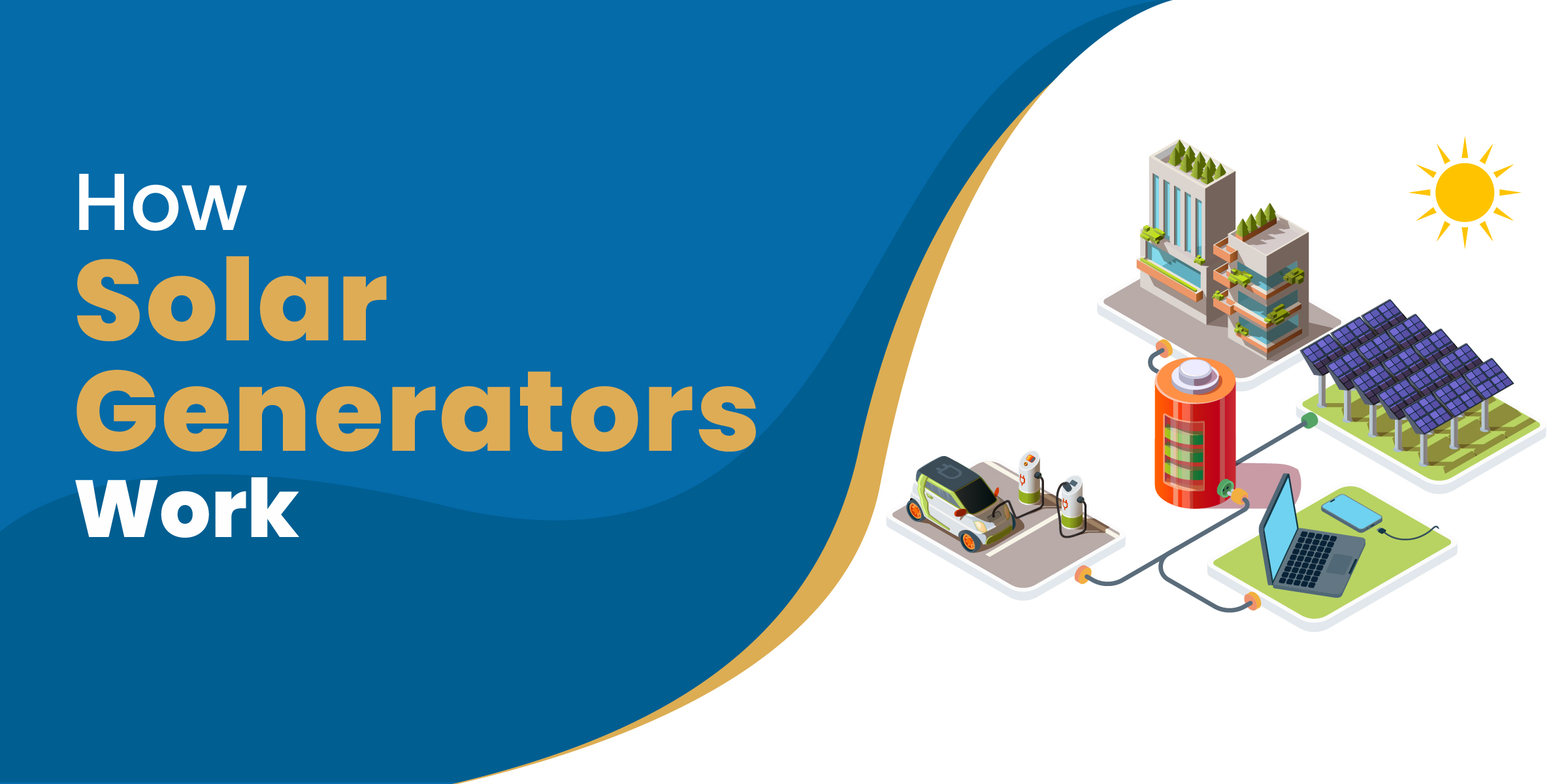 A solar generator operates just like a home solar panel system in that it gathers energy from the sun using its panels. It then stores this captured energy within its built-in solar battery.

Through an inverter, the solar generator can convert this energy into useable alternating current (AC) so that it can be used to power appliances.

Solar generators are meant as an environmentally-friendly solution when it comes to power generation. In most cases, it can be a highly effective choice compared to other types of fuel generators.

The main purpose of a solar generator is to provide people with a portable power solution to power small appliances.

Since these units usually don’t have a large battery, they aren’t designed to work with large energy consumers, nor are they designed to power the entire house. Think of solar generators as more of a backup power source.

Pros and Cons of Solar Generators

Here’s a quick rundown of the pros and cons of solar generators:

How Much Power Can a Solar Generator Produce?

Small solar generators can produce as little as 10 up to 250 watts of power. Once activated, these compact units can provide power for smartphones, laptops, and TVs alike.

The medium-sized solar generators are capable of generating between 250 to 1,000 watts of power. This type of generator is ideal if you’re looking for a unit that’s more versatile, as it can provide electricity for a wider range of items.

As for the large solar generators, you can expect these units to reach as high as 10,000 watts of power. These are great for powering large appliances and can operate for an extended period.

Can a Solar-Powered Generator Power a House?

The majority of solar generators today aren’t powerful enough to provide electricity for an entire house. However, units with high wattage are capable of powering as much as 85% of the appliances in the home.

One solar generator isn’t sufficient for the house but it’s possible to link several generators together to do achieve the same goal, However, there are a few areas to consider before doing so.

What Can You Run on a Solar Generator?

A solar generator can power almost all standard appliances in the home, including things such as microwaves, laptops, mobile devices, lights, ceiling fans, and more.

Solar generators work as ideal alternatives in case of power outages or when solar energy from the grid is currently unavailable.

There are portable solar generators that are great for camping especially since they are easy to bring around whenever needed. These units can provide people with some of the comforts from their home even when they are outdoors.

You can also find solar generators that can provide power higher than their indicated watt capacity. Such a feat is possible by leveraging next-generation charge controllers.

These devices are designed to let you push a unit to reach an output higher than 1,000 watts, allowing you to use it for emergency purposes. However, it’s important to keep in mind that this will quickly consume the charge of the generator used.

Can You Use a Solar Generator Every Day?

You can use a solar generator any time. Since the energy provided by your unit comes from the sun, you don’t need to worry about buying fuel to keep it charged.

The only caveat is that you need to put it out in the sun ever so often to recharge it. If you don’t recharge a solar generator, then you won’t be able to use it the next day. Careful consideration of when you charge it and when you use it is necessary.

With the main questions regarding solar generators answered, let’s take a look at the other inquiries people often ask about these products. 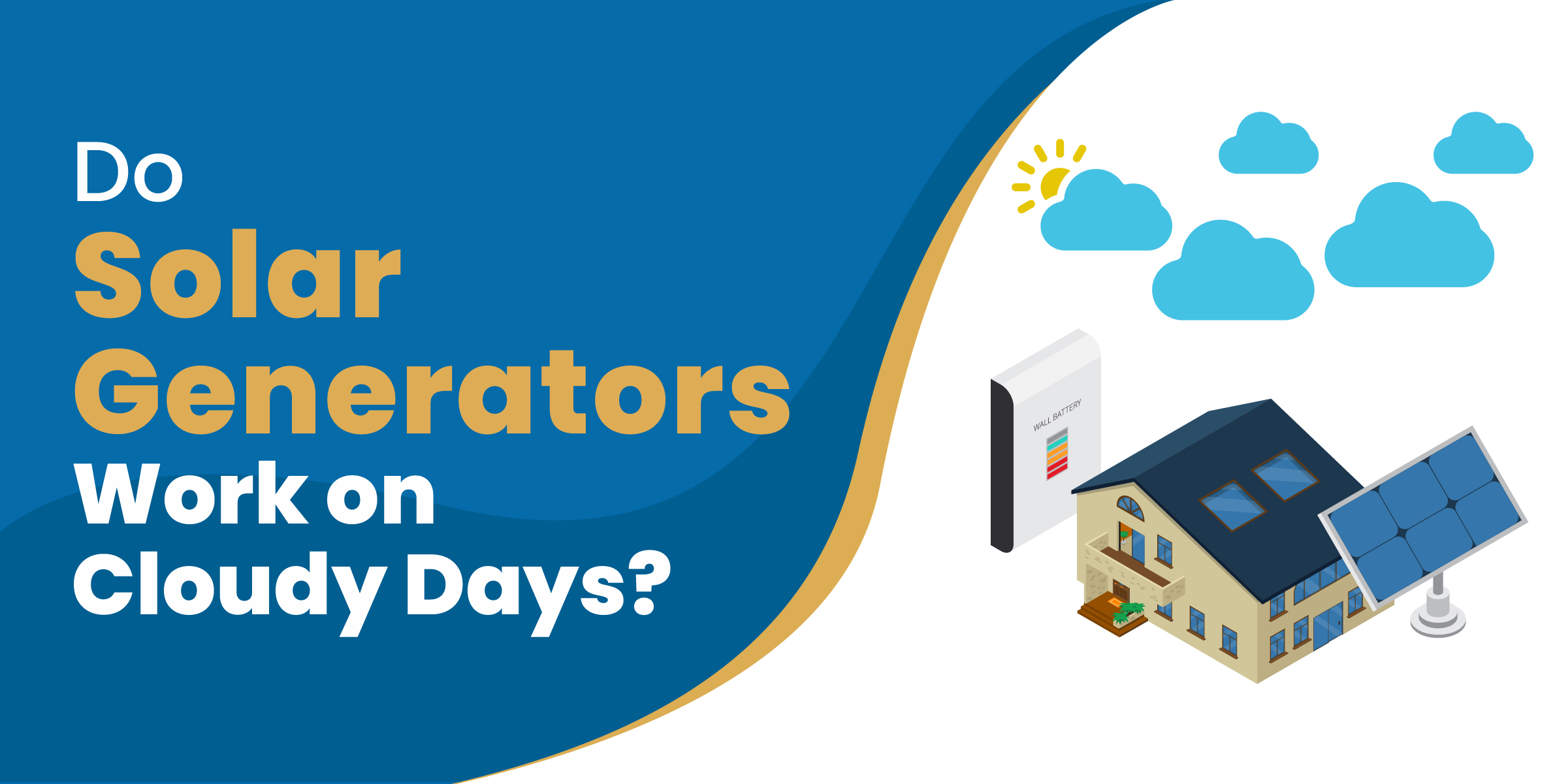 Solar panels allow you to take advantage of the clean and renewable energy provided by the sun.

But do these solar generators work even on cloudy days? The short answer is yes, they do.

The photovoltaic (PV) cells in their solar panels are capable of using direct and indirect sunlight in order to generate power. This allows them to continue charging even with minimal sunlight.

Keep in mind that solar panels will continue to remain functional even if clouds are obstructing sunlight but they will produce energy at a diminished rate. You can expect the panels of your units to generate anywhere from 10 to 25% of their regular power output during cloudy days.

Do Solar Generators Work at Night? 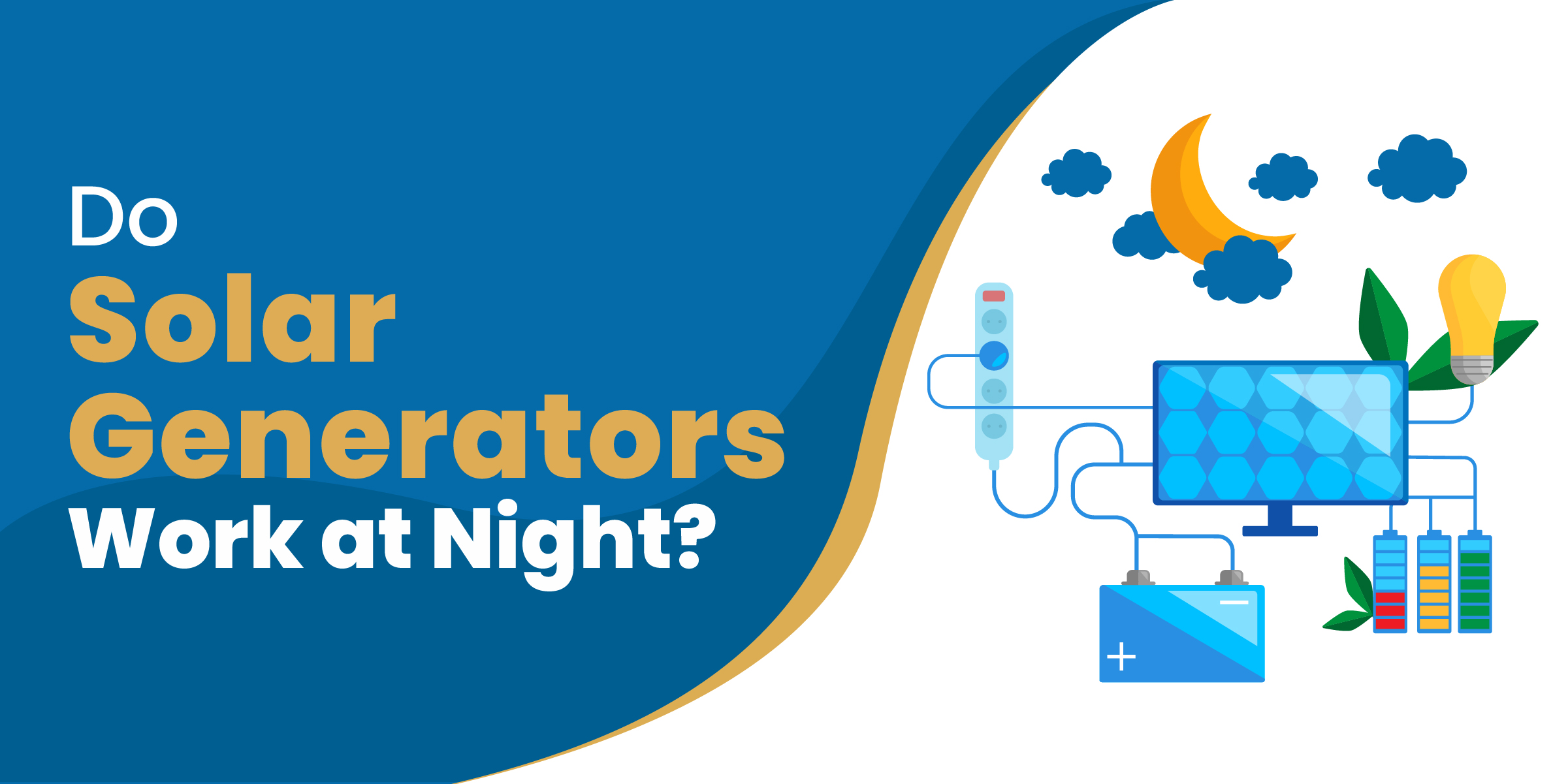 Solar generators obtain their energy from the sun and provide people with sustainable solutions for their electrical needs. If you’re wondering whether or not these units can still be used to power devices at night, then yes, they still do.

The charged batteries of your solar generators will let you operate them to provide you with electricity. How long your power will last from your units is highly dependent on their overall capacity, and how much you charged it during the day.

If you want to know if your solar generators will continue producing energy even at night time, then the answer is no, they don’t. The PV cells present in your unit’s solar panels need the light from the sun to generate electricity. It’s not like a phone where you can charge it overnight and have it ready to go the next day – you need to charge it during the day.

Do Solar Generators Work in Winter? 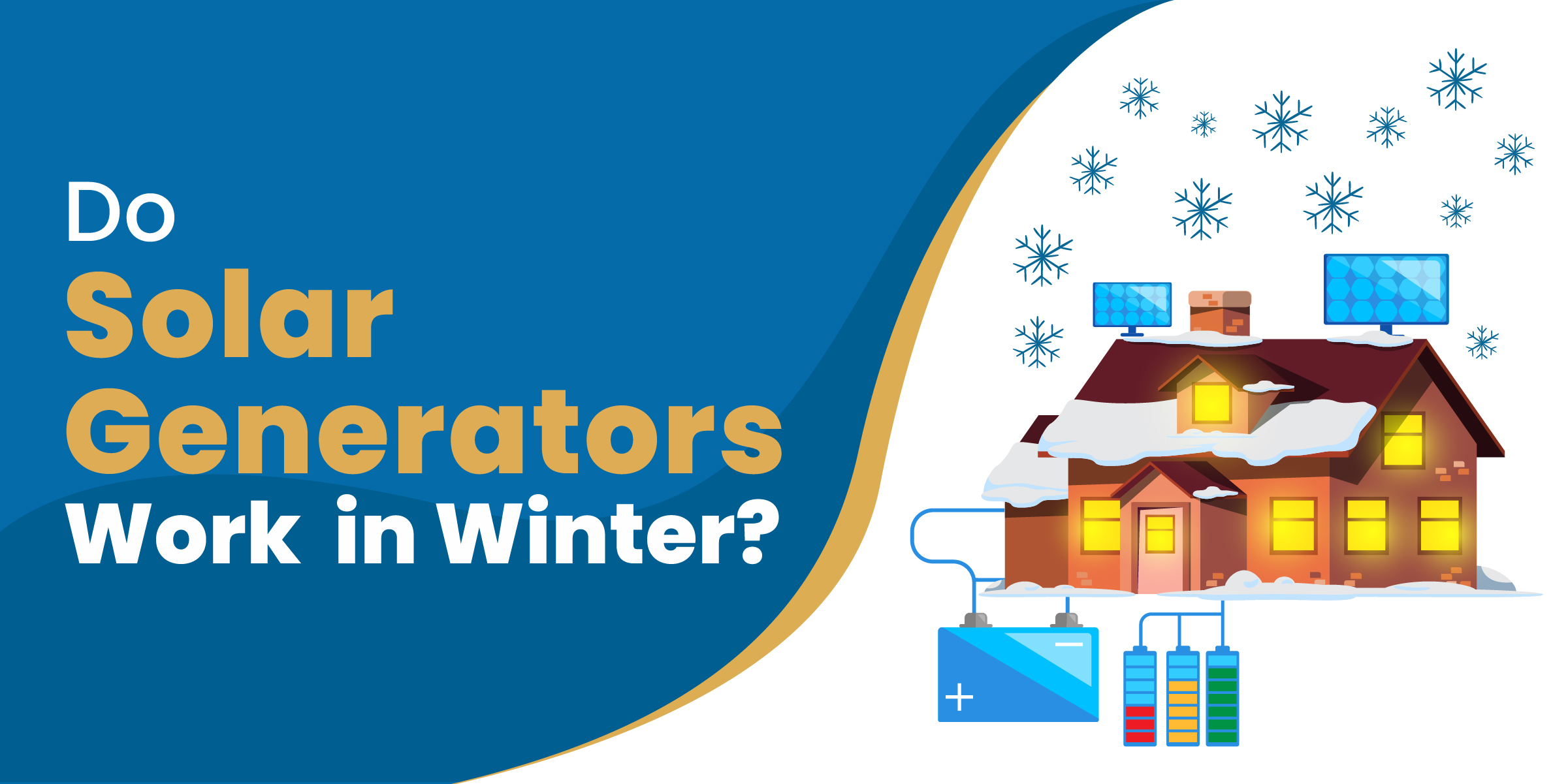 Yes, solar generators can continue working in winter so long as there is sunlight available. In fact, some experts say that cold weather conditions can improve the performance of these units.

This is probably because the photovoltaic technology within the solar panels is able to convert sunlight to electricity more efficiently when cold. There’s also a good chance that snow reflects extra sunlight to the panels of solar generators, thereby improving their ability to draw in energy.

However, one thing to keep in mind is that solar generators won’t work when their panels are covered in snow. You’ll need to wipe away the snow every now and then to ensure that your units can continue acquiring energy from the sun. You’ll also want to make sure your unit is sufficiently waterproofed before leaving it outside. Typically the panels are waterproof, but the battery is likely not.

The batteries of solar generators operate by consuming clean and renewable power. Compared to standard fuel generators, they don’t emit harmful fumes such as carbon monoxide.

A solar generator doesn’t produce noise during operation. They aren’t the same as conventional fuel-powered units that have multiple moving parts that can cause them to emit disturbing noises.

Perhaps the only noise you can expect to hear from the generator comes from its inverter. Even if there’s noise, though, it’s going to be extremely minimal and can be easily ignored by most people.

Can I Use a Solar Generator Even While It’s Charging?

The ability to use a solar generator even as it recharges will highly depend on its charge controller. Powerful controllers can let people use various devices and appliances at the same time generators are charging.

However, you should note that doing so will slow down its charging process. This means that you won’t be able to fully top up your batteries at the time you expect them.

Although there’s no danger to using a charging solar generator, you simply can’t keep it running for a long time. This is especially true when the devices and appliances you have connected consume a high rate of electricity.

How Long Will a Solar Generator’s Batteries Last?

The type of batteries of your solar generator plays a huge factor in how long they will last. Typically, you can expect standard lead-acid batteries to last about 3 to 5 years.

Solar generators can work in various conditions thanks to the modern technology we have nowadays. It’s possible to get them to charge even during cloudy days or winter conditions.

However, the panels of your units will draw energy the most when it’s sunny outside. High-quality solar generators are capable of operating a wide range of devices and can last for a long time.

It’s important to consider what size and type of solar generator you need before deciding to purchase.